11 Thanksgiving Trivia Facts (Think You Know Them All?) 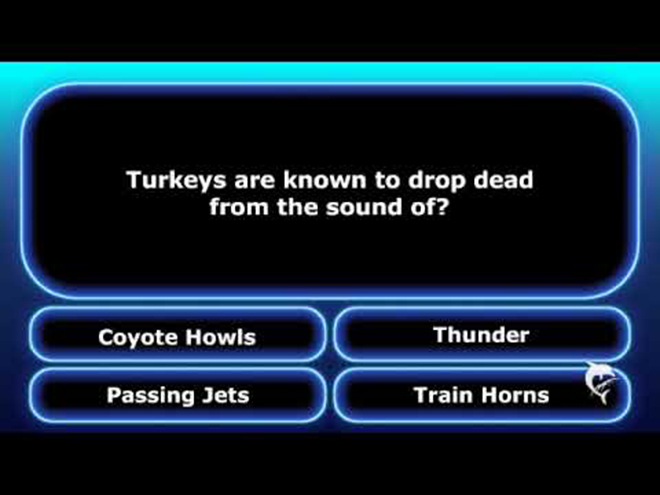 So – you think you know everything there is to know about Thanksgiving, eh? Well – maybe . . . and maybe not. But just to make sure you can pass the “Thanksgiving Trivia Test” that someone at the dinner table is sure to deliver this year, here’s a few tidbits that might help you score.

Does Turkey Really Make You Sleepy?

One of the most common misconceptions – but the real answer is “Not so much.” Turkey does contain the essential amino acid tryptophan, which is a natural sedative, but so do a lot of other foods – like chicken, beef, pork, beans and cheese. Though many people believe turkey’s tryptophan content is what makes many people feel sleepy after a big Thanksgiving meal, it is more likely the combination of fats and carbohydrates, as well as the large amount of food (not to mention alcohol, in some cases) consumed, that makes most people feel like following their meal up with a nap.

How Many Turkeys Are Consumed On Thanksgiving?

An estimated 46 million turkeys are eaten on Thanksgiving (the birds weigh, on average, 16 pounds). That is more than double the amount eaten on Christmas (22 million) and Easter (19 million). In 2010, more than 244 million turkeys were raised and about 226 million of those were consumed in the United States. Holy Turkey!

One of the greatest marketing triumphs of the 50’s, we’d say – because TV dinners have Thanksgiving to thank. In 1953, someone at Swanson misjudged the number of frozen turkeys it would sell that Thanksgiving — by 26 TONS! Some industrious soul came up with a brilliant plan: Why not slice up the meat and repackage with some trimmings on the side? And the family dinner has never been the same since.

Careers To Avoid If Black Friday Is Your Favorite Event

Going shopping the day after Thanksgiving? Not if you’re a plumber. Black Friday is the busiest day of the year for them, according to Roto-Rooter, the nation’s largest plumbing service. After all, someone has to clean up after household guests who, er, ‘overwhelm the system.”

The Movement Of The Turkey Inspired A Dance

Yep – and it’s called the Turkey Trot. Modeled on the bird’s characteristic short, jerky steps, it was one of a number of popular dance styles that emerged during the late 19th and early 20th century in the United States. The two-step, a simple dance that required little to no instruction, was quickly followed by such dances as the one-step, the turkey trot, the fox trot and the bunny hug, which could all be performed to the ragtime and jazz music popular at the time. The popularity of such dances spread like wildfire. (Although we’re just glad they didn’t change the main course to one of those other critters!)

Why Pick An Eagle When There’s Turkeys?

In a letter to his daughter sent in 1784, Benjamin Franklin suggested that the wild turkey would be a more appropriate national symbol for the newly independent United States than the bald eagle (which had earlier been chosen by the Continental Congress). He argued that the turkey was “a much more respectable Bird,” “a true original Native of America,” and “though a little vain and silly, a Bird of Courage.” (While we admit that plenty of people already know this bit of trivia, it’s still an interesting way of gaining our forefathers’ perspective, we think!)

And let’s just wrap it up with a few quickies (or perhaps “one-liners” would be more appropriate):

• Thanksgiving is not just an American holiday – Canadians celebrate it, too (except they do it the second Monday in October).

• Green bean casserole came about some 50 years ago – thanks to the Campbell’s Soup people creating new recipes for its annual cookbook. (Now, the company sells about $20 million worth of cream of mushroom soup, most likely for people to make the casserole.)

Now the ball’s in your court. If you can’t win yourself a bar-bet with one of those tidbits, then odds are you’re not the genius in the room. 🙂 Happy Thanksgiving!!

New Home Resource helps current and future homeowners with all of their Las Vegas real estate needs. Whether your preference is for a newly-built home from a local builder, or a resale property in just the right location, a New Home Resource Realtor® is here to find the perfect property for you. Please contact a New Home Resource Realtor® today at 702-365-1000 or at www.newhomeresource.com. Broker Joanna Piette, and agents Denise Moreno Thrasher, Jessica O’Brien, Evelyn ‘Beng’ Kern, Lance Partin and Kathy Paterniti are all here to help!